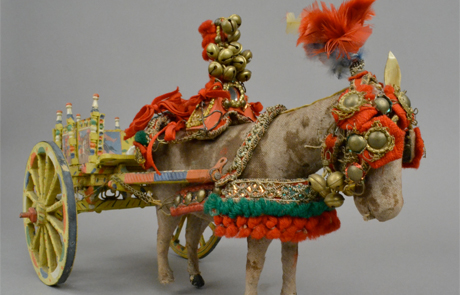 Beginning around 1660, "The Grand Tour" became an educational rite of passage for English and Northern European elites, usually young men. The Grand Tour was an extended trip across Europe, an immerson in the sites and artistic achievements of classical antiquity and the Renaissance. The significance of the trip for European elites dwindled by the 19th century, but improvements in transportation and the growing economic power of the United States fueled a boom in American tourism on the Continent. They too sought adventure, education, and the boost in prestige the trip provided.

Just like travelers today, these American tourists brought souvenirs home with them. Many of them flocked to Italy, home to the remnants of the Roman Empire and a wealth of Renaissance masterpieces. Quite often, they pilfered artifacts from ancient sites. The Roman bust (EI 229) and mosaic fragment (EI4 228 S2) from the Baths of Caracalla, featured in this exhibit, are two such examples, acquired on a trip to Italy in 1872. Likewise, the Ceramic Tear Vase (EI4 333) was picked up from an Etruscan tomb in 1909. There was little protection from this practice until 1939, when Italy passed a law claiming state ownership of all objects of historic and artistic interest. In recent years, the Italian government has adamantly pursued and repatriated its cultural patrimony.

Intrigued tourists also bought reproductions and everyday objects, which are now interesting and valuable in their own right. Model Gondolas, painted Sicilian carts, cameo shells, and Italian card decks were affordable and easily transportable back to the States. Today, such objects provide small snapshots of Italian material culture at the turn of the century.

Katie Anderson was the Elvira Growdon Intern for Collections Management and Curatorial Practice for winter 2017. She is currently completing her MA in History and Museum Studies at Tufts University.

The Baths of Caracalla, Rome, Italy

The Baths of Caracalla, Rome, Italy