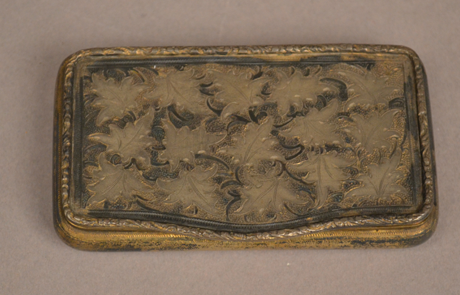 Snuff, a powdered form of tobacco meant to be sniffed, was popular in European royal courts from its arrival in the 15th c. and Qing China (1644-1911), where the decoration of snuff bottles quickly became an art form all its own. Both Spanish and Portuguese explorers observed its use in the Caribbean and Brazil, but it was the Portuguese who introduced it to China, Japan, and potentially Africa while the Spanish began the large manufacture of it in Europe. Snuff was considered by both Europeans and Chinese to possess curative properties. This was how the use of snuff survived the imperial ban on tobacco in China during the Qing Dynasty, where it was considered a cure for the common cold; for its ability to relive her headaches, Catherine de’ Medici, Queen Consort to King Henry II of France, renamed it the “Queen’s Herb.”

The objects in this collection, though they are all containers for holding snuff, represent a set of needs and values distinct to their respective cultures in their form, material, and decoration. In China, snuff containers took the form of bottles, which could be easily stored in a sleeve; Europeans, by contrast, preferred pocket-sized boxes for holding a day’s worth of snuff, while the examples from East Africa, Kenya, and Tanzania have long straps and can be carried over the shoulder. Despite their distinguishing characteristics, these containers have all been classified as “personal artifacts,” and sub-categorized as “personal gear.” They are portable, and most of the time small, and can be held easily. But most of all they are “personal”; they would have been carried close to the body, held in the hand, and used again and again, invested with meaning from both their original owners and the donors who gave them to the museum.

Jessica Rymer is the Growdon Collections Intern for spring 2014. She is currently working towards a master’s in Historical Archaeology at the University of Massachusetts, Boston, where she uses clay tobacco pipes to study smoking behavior in the 17th and 18th centuries. Her thesis uses smoking behavior to explore the interactions between English landowners, enslaved Africans, and local Native Americans on Shelter Island, New York.

The French translates to “When the cock crows, my love (or friendship) will end.” Because a faience cock will never crow, snuffboxes with this saying were popular souvenirs.

This snuff bottle also has a small brush made from hair in place of a spoon for retrieving snuff from the container.