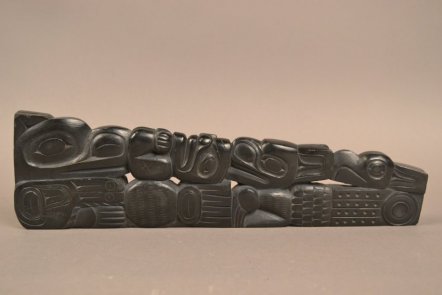 Tourist Art from the Pacific Northwest

Boston Children’s Museum has a rich collection of Native artifacts that have been collected from across North America. Among these artifacts is a subset of tourist art that was created by indigenous peoples and purchased and collected by Euro-Americans. Two neighboring tribes in the Pacific Northwest, the Haida and the Tlingit were both deeply impacted and influenced by the growing Euro-American fur trade in the 1700s.* These groups recognized the new market these visitors created and began to develop and adapt art to sell. As the fur trade declined, new visitors began to arrive in the Northwest Coast, including missionaries, government officials, anthropologists, and tourists, and the tourist market expanded to meet these new tastes.

Haida and Tlingit artisans adapted to these new influences in various ways. European scenes quickly became a staple for Haida carvers and were in high demand by tourists, reflecting Euro-American consumers’ desires to collect images of themselves in exotic representations. The Tlingit and other groups also incorporated images, styles, and materials of visiting Euro-Americans into the art that they produced to sell, at times taking European objects and covering them in indigenous materials in a complex reformulation and presentation of indigenous identity. Both groups also continued to produce art portraying daily life and traditional beliefs for the tourist trade, frequently presenting the most “traditional” aspects of their culture.

Tourist art cannot be disentangled from colonialism and other processes of cultural change, as it is an artistic expression of the exchange between indigenous and Western cultures. Through the medium of art, indigenous peoples assert their authority to represent themselves to others how they wish to be represented; this authority can be asserted by developing new crafts or modifying traditional forms. Each Haida and Tlingit tourist art piece asserts the artist’s ideas of identity and cultural heritage.

*The traditional homeland of the Haida is on Haida Gwaii in British Columbia, Canada. The Tlingit homeland spans from Yakutat, Alaska south along the Alaskan Panhandle and into the Canadian interior.

Meredith Luze was the Growdon Collections Intern for fall 2014. She is finishing her Master of Arts in Historical Archaeology at the University of Massachusetts, Boston. Meredith currently works with the National Park Service at the Northeast Museum Services Center where she continues to research and catalogue a variety of historical and archaeological artifacts.

Gift of Mrs. Florence A. Browne and Miss Mildred Kennedy, 1942