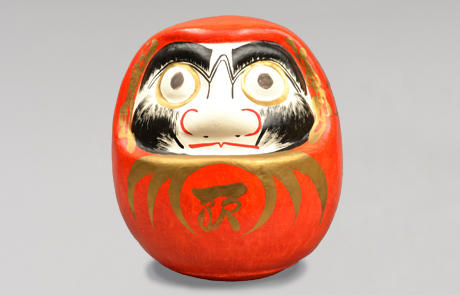 Boston Children's Museum's Japanese collections include approximately 4000 artifacts that illustrate daily life in Japan as it evolved from earlier periods, such as the Edo and Meiji, to the present day. Almost half of the collection is on view in Japan Study Storage, which highlights selected groups such as dolls, folk craft and clothing. In general, the Japanese collection includes objects that describe folk characters and traditions; relate to or are a part of various festivals such as Girls’ and Boys’ Days; have to do with time-honored customs and traditional arts valued by the society such as the tea ceremony; have to do with children, especially educational materials; and document and are a part of family and home life, and in particular, relate to and support our programs in the Kyo-no-Machiya (Japanese House). The single largest artifact in the collection is the authentic Japanese House, donated by the city of Kyoto, Japan in 1980. One of only a few examples of vernacular Japanese architecture from its period in this country or in Japan, the Japanese House exhibit is the centerpiece of the Museum's Japanese Collection.

Donated by the Citizens of Kyoto, Japan, 1976

Donated by the Citizens of Kyoto, Japan, 1976

Purchased by the Children’s Museum, 1985

Donated by the Committee on World Friendship Among Children, 1928